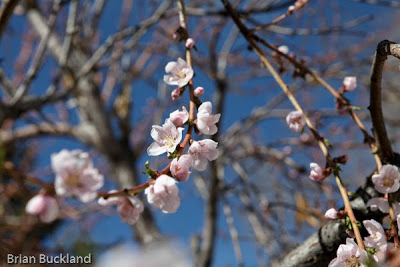 When I moved into my house on a lake in Denver, one of the pluses was this peach tree in the backyard.  The property manager told me that it hadn’t produced a single peach in over 10 years.  Then just before last summer they decided to prune it and see what would happen.  It produced so many peaches that it couldn’t hold up it’s own weight resulting in one of the big branches breaking off.  I’m looking forward to seeing what happens this year and if it’s a repeat of last year.  So far it looks like a good start to a tree that wants to do what it was designed to do……

I also wanted to answer a question about ‘depth of field’.  I’ve been asked literally 3 times in the past month about it so why not explain a little bit of it here.  “How do you make part of a picture blurry and part in focus, or the whole picture in focus for that matter?”  That’s what you would call depth of field.  As I was taking pics of the peach tree I was playing with my settings a bit in order to illustrate how it works.  In the above picture the flowers on the branch in the center of the picture are in focus, almost all of them.  The shot was taken at 1/640 sec at f/6.3 about 5 feet away at 70 mm.  There are several online calculators that can help you figure out your range.  For instance the calculation for the above image being roughly 5 feet away are:

This next shot I opened up the aperture and shrunk my depth of field.  Same branch, only shot at 1/2000 sec at f/3.2 also at 70 mm.  The difference is very noticeable and you can start to see how playing with depth of field can really aid you as a photographer in getting the effect that you want in your image. 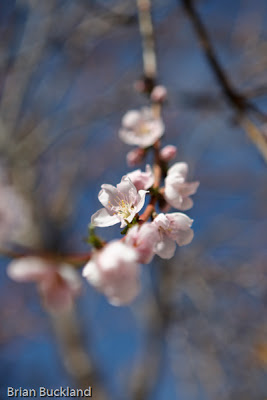 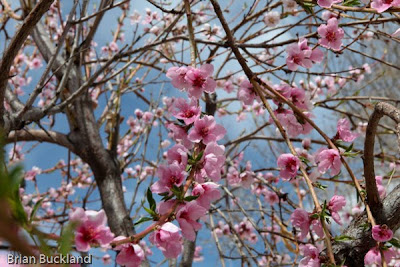 Notice that much more is in focus in this shot and you can clearly see the branches in the back ground.  The calculation for these settings are:

My range is much greater, meaning that the beginning distance from the camera that is in focus starts at 4.14 ft away and then it starts to go out of focus 6.32 ft away from the camera.  Thus giving you a depth of field that is 2.19 ft deep.

One Reply to “Spring has Sprung….Depth of Field”